Send us your comments or information you may want to share and we will publish them in here. 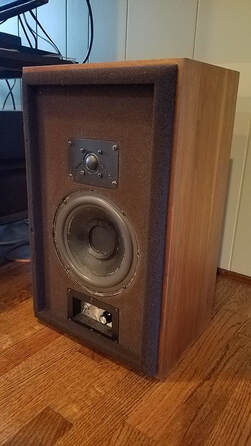 
Hello, I just refurbished a pair of Cizek model 2's. I was impressed with the amount of solid bass from a 8" woofer and the excellent rigidity of the cabinets. The Peerless dome tweeter is a proven design. I only had to clean, refoam the woofers, replace one broken connection post and detail the cabinets. Original grill foam was intact but does show wear.
10/16/2019

Howard sent the following email. He rebuilt his Cizek II, and shares some images from the process.

I am sending this email again. I don't think my pictures attached with my last effort

Please feel free to use all pictures for website.

This is Chuck. You have a couple of my Cizek speakers posted on your letters section. I wanted to mention that there's a new (old, but new to me) Cizek Speaker. It's called a Model T205B.

From the 5-way Cizek speaker that I shared with your page, this is helpful (to me). It looks like they reversed the model number and serial number on my speakers. This means that my model *the 5-say speaker) is a T401B. 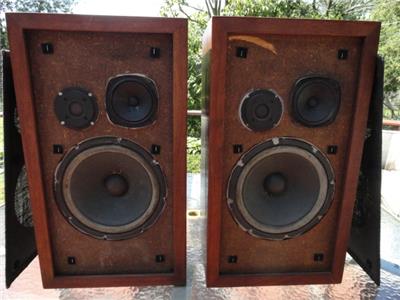 John, thank you for your contribution. Very appreciated.
I posted his images under Cizek 1 description.

Sorry it took me so long to get these to you, had some things going on with family.  I also hope the images are not too large.  There should be 10 in total, if I find more I'll send them.
On the first image of the Cizek brochure the number '205' in the upper right corner is the price per speaker, before taxes.  The total cost with taxes in August of 1977 was $434.60 (US dollars).  These speakers seem to have held their value over the years.  Regarding the manual, I always thought it was interesting that they included so much information concerning wire size and how it affected power loss and damping factor.

Let me know if you get these or if I should resend them.  Hopefully other members can post documentation for the other speaker models.  I would love to have a manual for my MG27's, as I know very little about them. 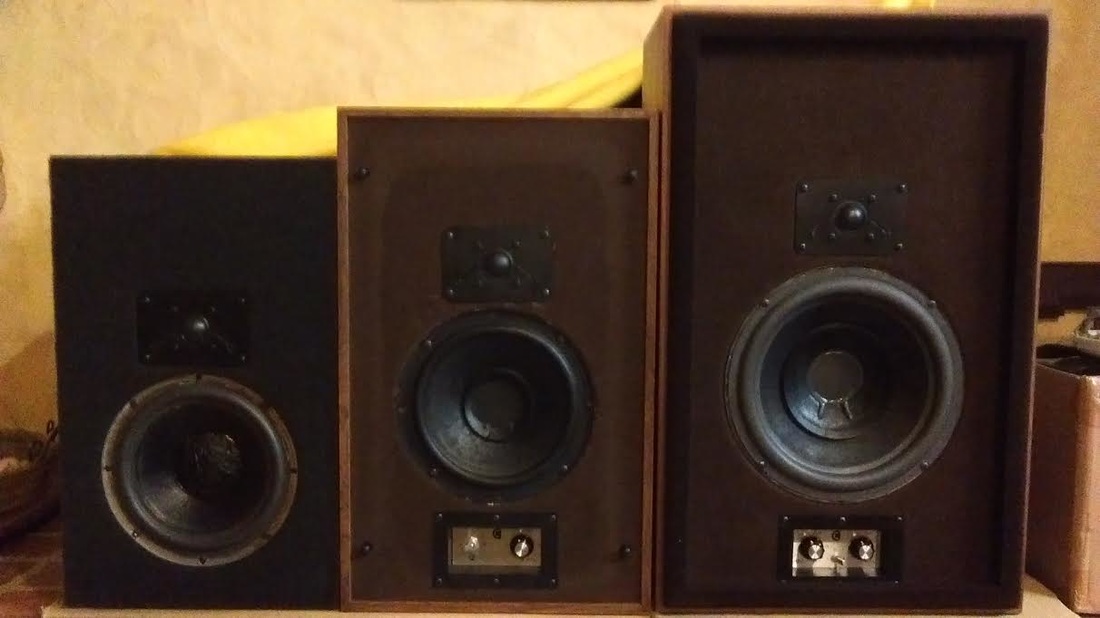 
Andrej from Slovenia did a change in his life apparently. He went hunting and after few months..... Well the picture speaks for itself. He is the pride owner of 3 speaker sets.
Congratulations, let them serve you well. And thank you very much for the picture!

A letter from Sergio (2/1/2016)
Comment
Hi,
i just bought a pair of early Cizek III (full grille by foam in front). Can someone pls help me to identify the right color of original cables plugged to the the tweeter and woofer pin?
I mean :
Yellow cable to negative or positive plug of the tweeter?
Red cable to positive (as i suppose) or negative plug of woofer?

I know that in the latest Cizek III (with cloth grille instead of foam grille) a modified crossover was introduced (with more coil and capacitor and reverse polarity at the input plugs) so pls can someone help me also to identify the same colors in the last version of the crossover circuit?

Thank You so much in advance for any information

Thank you for your email. I did my best, hopefully will be useful.

A letter from Otis (1/14/2016)
Comment
i own the model ones and they are fantastic sounding. they are 30 years old and was thinking about replacing caps and wiring .possibly replacing woofers as these have the foam surrounds. again they sound wonderful. any help will be appreciated. have seen new woofers on e-bay. just wondering if foam is altering anything. thanks again. yours for better listening. otis


Thank you for your email.


IMO you can not repair something that works. I had the same thoughts about replacing caps on mine.

I did a response measurement (microphone) at home and realized, that is perfectly fine and very much similar to the once reported in magazines decades ago, hence realized the caps are just fine. Same applies for wires. I encourage everyone to keep the system as original as possible, specially if it works and sounds great. There would be no benefit by altering it, except loosing its value.


Regarding the woofers, they must be Cizek woofer of same type. If the surround foam on yours is bad it can be replaced with no alteration to sound. Make sure you use a soft foam, not rubber.  There is a lot of companies doing this service nowadays.

Due to the gap in numbers for the second pair seems that they matched the pairs at QC in the factory before shipping them as pairs. My Model 1 tag shows shipping weight at 49.9 lbs which is too heavy for just 1 speaker - so they must have shipped pairs.Great Website Thanks for everyone who shares here. I used to have a pair of AEI ( model I type ) as well but sold them about 15 years ago. I believe AEI bought out Cizek when he moved on to Altec Lansing. They have 2 addresses listed as 15 Stevens St Andover MA on the model III and 149 California St Newton MA on the Model I. These locations are about 20 miles from each other. Newton MA being much more expensive real estate than Andover. Would guess the company started in Newton ( closer to AR ) then moved to Andover for a cost savings measure when they started having financial problems. I live about 50 miles from both locations north of Worcester MA which is probably why I was able to find all 3 pairs which I paid nothing for. ( actually 4 pairs if AEI set included ) They all came from local trash disposal sites - All they all needed was new surrounds which I replaced myself at minimal cost... I consider myself a lucky guy
Best Regards
Bill
Chuck opened up something interesting. (June/23/2015)

The last time I wrote, I mentioned a rare unknown Cicek's (5-way early speaker) that you have included on your website.

Although not nearly as exciting, I have come across a pair of speakers that would appear to have also been made by Roy Cizek. I conclude this from various internet searches listed below.

I have taken photos of the speakers and if these are indeed made my Mr Cizek, I would be most happy to provide you with photos (if you would like).

Below are quotes found from the internet.

"A quartet of Roy Cizek's new speaker systems could be heard before the meeting, during
intermission, and afterward, and comments throughout the room were highly favorable.
Cizek took a degree in music and music theory from Indiana University, but he minored in
physics and it was the technical side of his nature that finally won out in his professional life.
Designing speakers began as an avocation, prompted by his dissatisfaction with the speakers
he heard. First he built them strictly for his own pleasure, then eventually people paid him
to do it. He designed several house-brand speakers during twelve years or so in the Midwest.
He moved to Boston two-and-a-half years ago and after an aborted venture with AEI is now in
business for himself as Cizek Audio Systems. The first speaker from this firm is a two-way
acoustic suspension system with a ten-inch woofer and one-inch tweeter, available in wood or
vinyl finish for $196 and $176 respectively (from Tweeter and Eardrum locally)."


Here are some reference links that I have found on the internet.

There seems to be little available history about these speakers. I acquired these speakers from a friend that worked at a high-end speaker repair shop (in business since 1974). Some people either leave their repaired speakers (not paying the repair bill) and others bring speakers in for trade or consignment.

I told my friend that I was looking for the Cizek Model 1. He called to tell me about a speaker arrival called "AEI." Although my friend has an extensive speaker knowledge background, these speakers were 'new' to him. He could only confirm what has been written on the internet (which is very little and limited).

It would appear that AEI (Audio Engineering International) was a local company founded by Roy Cizek. Apparently, after Mr. Cizek left the company, they remained in operation only just a little longer. From internet searches, it appears that they only made one speaker; which was the  "AEI Evolution 1."

Through searches, it is claimed (aside from the crossover being in the back) that these are identical to the Model 1's. Seeing as though the company was founded by Roy Cizek, I thought these might be of interest.  I wish that I had more information to offer, but am open to any new findings that you or members might uncover.

It looks like Cizek Enterprise came first. The early 5-way Enterprise speakers that I own remind me of late 1960's (resembling an AR speaker from that era).

From one of the Internet documents, I do wonder if AEI does predate Cizek Audio Systems.

I do not own a pair of Model 1's , but somebody on the Internet said that the paperwork (on the back of the speaker) is the same - and the only difference is that AEI is in the place of Cizek.

I wish that I knew more about these.


CHUCK, THANK YOU VERY MUCH !

Simon sent pictures of his new stands for his Cizek speakers based on the original.  (April 30th 2015)
To make sure, he built 2 different sizes having the center pillar 16cm or 28cm from ground. 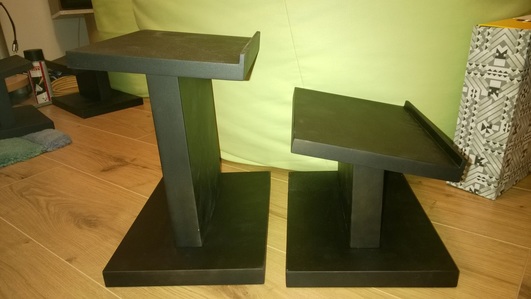 I remember talking with Mr. Cizek during one of the New York shows and remarking that based on listening at the AR showroom in Grand Central Station, I thought the best sounding speaker they had was the 2ax. He agreed and told me that was the character he tried to duplicate in his speaker. They seemed to me to have more of an open window, perhaps due to some emphasis in the 1kHz to 3 kHz range.

Simon sent me a picture.He seems very passionate about his new speakers and I bet he has a strong reason for that. Nice!
Cizek Model II and III side by side.

Chuck came in with an unusual Cizek.

Thanks for the email. I wish that I had some exciting story about these unknown Cizek speakers. I found these on ebay in 2007. I don't remember the exact price, but with shipping, I think I paid around $250.00 There were no grills or badges. The construction looked great and judging from appearance, these reminded me of late 60's AR's.

I'm not sure how these were supposed to sound, but for my personal ear, I like the sound to be a bit 'bright' (similar to the AR or Wharfedale series). The speakers sound decent, but in my opinion, not very "bright" (even after knob adjustments on the back)   I'm sure that if I could find a schematic, the sound could be improved. I have no idea of the year or anything. I've looked all over the internet and have never seen a pair that looks even close to this set (it's a 5-way; one woofer, two mid-ranges and two tweeters). In a way, I like having a pair of Cizek's that no one else seems to own, but on the other hand, I wish that someone could provide some information.


Chuck
Mr. Kanuc  sent me pictures of his 747 speakers.